Gas medium is different from liquid in the flow of valve because of its inherent characteristic – compressibility. For example, in the throttling process, because of the strong disturbance and eddy current at the throttle orifice, the energy distribution is uneven and noise is easily generated. This paper mainly discusses the relationship between the change of parameters and the cross-sectional area of the flow passage when the gas flows through the valve equipment, as well as the transmission and conversion of gas energy in the flow process.

In engineering, the common gas flow is stable flow or nearly stable flow. At the same time, the flow velocity, pressure and temperature parameters at any point on any section are different. And the working medium may exchange heat with the outside in the flow. The above process is extremely complex. In order to simplify the study of the problem, it is considered that there is no time for heat exchange with the valve, considering that the gas passes through the valve quickly in the project. At the same time, the average value of a parameter of each section is taken as the value of the parameters of each point on the section, so the flow of gas working medium is regarded as an irreversible one-dimensional adiabatic stable flow. 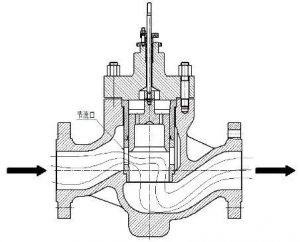 3. If the area at the orifice is reduced small enough, the flow rate may increase to the sound speed. At this time, the mass flow of the whole valve reaches a large value. If the area is further increased at this time, the gas expands to supersonic speed and the pressure is further reduced. It may cause loud noise. However, the mass flow does not increase. This is the case of blocked flow encountered during gas selection. For the trim structure of multi-stage pressure reducing valve, pay special attention to the situation of increased flow rate. Because multi-stage pressure reducing internals are usually designed as follows (see Figure 2). Generally, the outer sleeve area is larger, and then decreases to the inner sleeve area. This design method of flow from outside to inside is very effective for liquid working conditions. It effectively increases the damping and reduces the differential pressure. But for the gas working condition, the effect is just the opposite. As the throttling area shrinks step by step, the gas accelerates, the pressure decreases, the density decreases, and the medium expands, which may be expanded to sonic or supersonic speeds. At this time, it will cause strong vibration. Because the strength of the vibration is proportional to the square of the velocity. The light ones cause loud noise, and the heavy ones can even damage the pipeline. Therefore, for the multi-stage pressure reduction structure, the gas flow direction should flow from inside to outside. First let the gas throttle and depressurize, then gradually compress moderately to control the internal flow rate. Prevent the impact of vibration (see Figure 2).

Where: pcr is the medium pressure when the flow rate reaches the local sound speed 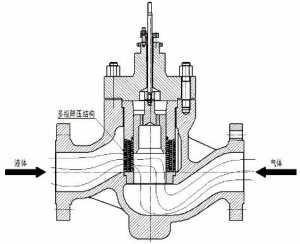 Vcr is the critical pressure ratio

к Is the specific heat coefficient

The above formula shows the pressure ratio when the flow velocity reaches the local sound velocity, that is, when the mass flow rate reaches a large value, that is, when the blocking flow occurs. This ratio is only related to the nature of the working medium. Here are some common values, as shown in Table 1:

It can be seen from the above table that although the gas properties are different, the critical pressure is about 0.5. Considering the allowable range of errors in the project, this is the identification condition for judging the blocked flow in the selection of gas working conditions: when the pressure behind the valve/the pressure in front of the valve is ≥ 0.5, it is considered that the blocked flow will occur.

This paper only qualitatively analyzes some flow characteristics of gas passing through valves in engineering and some matters needing attention in engineering selection. As the medium passes through the valve with high friction, strong disturbance and a large number of eddy currents, it is in a state of degree imbalance, so it is impossible to carry out a very specific calculation and analysis. It can only be analyzed with the help of CFD (Computational Fluid Dynamics) software, combined with the experience of actual working conditions. 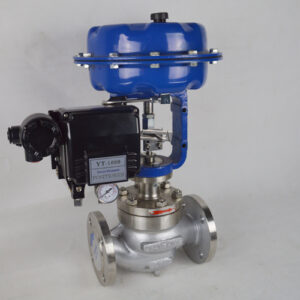